He Put Heart and Soul Into His Pastry 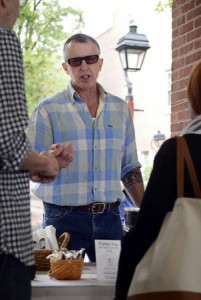 For those unfamiliar with Gil Ortale – or rather, with his quest to bake the perfect French canelé (pronounced cahn eh LAY) – it’s the story of a local guy who in his midlife years not only established his métier in pastry, but also became absorbed in an endeavor that saved his soul.

Ortale, who held a number of cooking and other jobs in the city over the last three decades, had been out of work and struggling till he started baking the obscure French pastry.

“I was kind of in a tailspin,” he says. “I had to work at mastering this thing of beauty. And there was a real redemptive part of it.”

The cooking tale goes back to when Ortale was an undergraduate at Temple University in the early ’80’s when he started at the famed Steve Poses’ Frog restaurant at 16th and Locust, where he rose through the ranks.

“I went from chopping garlic to being promoted as a chef,” says Ortale, now 55, who grew up in the city’s Northeast and now lives in Bella Vista.

He then opened a grill at the Reading Terminal Market in 1985 that lasted three years; profits dwindled and he closed shop. His next endeavor was running the food-service operation for Cigna for five years. When the insurance giant farmed out Ortale’s department to Aramark, Ortale’s position changed, and feeling dissatisfied, he left in 2000.

He then quit food…