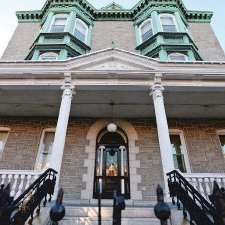 Old-timers who grew up near the legendary intersection of Kensington and Allegheny still refer to the architectural gem on G Street as “the Mansion.”

Indeed, the splendid fieldstone structure, which towers above red-brick rowhouses, was the grandest private home in Philadelphia’s Kensington section when it was built more than a century ago.

For the last 40 years, it’s been the residence of Betty Ann Guckin, as well as the epicenter of Guckin Funeral Mansion, the family business she maintains.

“I can’t imagine living anywhere else,” says Guckin, 45, partly about her home, and partly about the surrounding neighborhood, where she has spent her entire life.

During its heyday, K&A was a bustling blue-collar district, where generations of breadwinners toiled in textile mills and meat-distribution centers. Over time, industries pulled out, leaving Kensington a gritty facsimile of its earlier self. Today, abandoned factories, shuttered churches, and hollowed-out houses wait patiently, hoping that gentrification will save them.

In 1907, Irish immigrant Michael O’Rourke, who was a municipal contractor, spent $106,000 to build the 15-room mansion and three outbuildings. After his death, businessman Conrad Campbell owned it from 1914 until 1970. Ascension of Our Lord parish owned it for four years afterward.